You are here: Home | Planes and Trains

I like giraffes and big airplanes
Really fast choo choo trains
Hippos and Rhinos, gorillas too
And funny little monkeys at the zoo 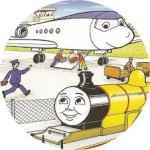 Check out our fun airplane facts for kids and enjoy learning about different aircraft.

Find information on commercial planes, drones, wings, engines, the history of flight and much more. Read on for a wide range of interesting trivia and information related to airplanes.

Airplanes are fixed-wing aircraft that are propelled through the air by engines.