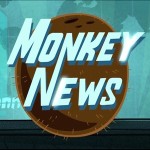 Key to the communication by the male Campbell’s monkey is the suffix “oo,” according to a new study, which is published in the latest issue of the Proceedings of the Royal Society B.

By adding that sound to the end of their calls, the male monkeys have created a surprisingly rich “vocabulary” that males and females of their own kind, as well as a related species of monkey, understand.’

10 Animals That Can Speak for themselves

“The study confirms prior suspected translations of the calls. For example, “krak” means leopard, while “krak-oo” refers to other non-leopard threats, such as falling branches. “Boom-boom-krak-oo” can roughly translate to, “Watch out for that falling tree branch.”

Apes laugh similar to humans, according to new research exploring the evolution of laughter.

“Several aspects of communication in Campbell’s monkeys allow us to draw parallels with human language,” lead author Camille Coye, a researcher at the University of St. Andrews, told Discovery News.

For the study, she and her team broadcast actual and artificially modified male Campbell’s monkey calls to 42 male and female members of a related species: Diana monkeys. The latter’s vocal responses showed that they understood the calls and replied in predicted ways.

They freaked out after hearing “krak,” for example, and remained on alert as they do after seeing a leopard.

“In addition to “krak,” other root calls are the “boom,” as well as hok (crowned eagle) and wak, with a meaning that hasn’t yet been confirmed. These are root “words” that the monkeys vary with the “oo” suffix. “Hok” by itself, for example, refers to the bird of prey, but “boom boom hok-oo hok-oo” appears to signify claiming of territory.”

Our Educational Kid’s Monkey Song is fun and upbeat with contemporary music.